As we enter June it’s time for the team workouts and the College camps to get cranked up. February through May was for the private showcases and a handful of Spring Games here in Northwest Georgia. Here is a list of guys that have made an impression on either us/camp evaluators/ or fans around NwGa this offseason.

Gatlin Hancock (Darlington): The 6’4 250 rising Junior OL/DL was a Top 5 Award winner at two MVP Camps this Spring. We saw him in action during the Tigers Spring game where he played real well, especially on defense. Twitter

Trevon Gott (LFO): The 6’1 175 rising Junior Athlete made a big splash this Spring. Our radar here at NwGaFootball is usually pretty low but this guy flew under it! Trevon won MVP at the Compete24 Camp and had an outstanding Spring Game, scoring a long TD. He is on everyone’s radar this Summer. Twitter

Bobby Campbell (Adairsville): The 6’2 270 rising Sophomore OG/OT won Top 5 honors at the MVP Camp in March. Started as a freshman and the guys at Velocity Football give this guy two thumbs up. Twitter

Jakari Clark (Rockmart): The 6’0 WR/DB made big impressions this Spring. He won Top 5 at the MVP Camp this Spring and also picked up his first D1 offer from Navy. The Yellow Jackets are loaded again this season and Clark, and alot of other Jackets, will be on every college radar in 2021. Twitter

Eli Barrow (Cedartown): The 5’10 200 rising Junior LB/FB had a good Spring. Not only is he a standout on the Bulldog baseball team but he won Top 5 honors at linebacker at the most recent MVP Camp. Twitter

Shaun Lester (Chattooga): The 3x 1000 yd rusher gave the Indians a glimpse of what to expect in 2021. He had 6 carries for 165 yds and 2 TDs vs Coahulla Creek while also getting in on a few big tackles from the LB spot.

North Murray Trio: The QB/WR combo of rising Junior QB Seth Griffin and Senior WR Michael McDade looks like one for Mountaineer fans to be excited about in 2021. Rising Sophomore WR/DB Judson Petty had a good game on both sides of the ball for North Murray.

6A Names to Know: A few names that fans outside of 6A might not know had good Spring performances. We heard really good things from Trion fans about rising Senior WR Linkin Farrar. The Armuchee Indian’s WR JJ House, who scored 2 TDs, and on defense for the Indians rising Sophomore Jackson Coonley, who led the Indians in tackles during their Spring Game win.

Other Names We Heard: 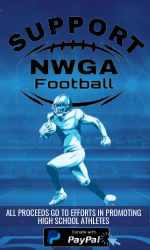